In The Deep End

My South America Adventure has begun. Alas, Estoy en Colombia! It is absolutely beautiful, entirely decorated with art and the people are undeniably hospitable. I promise to share every bit of everything with you; including how little Spanish I know and how it serves me.

Since arriving I have been in the company of Zakiya, except now. Zakiya and I met through the Workaway platform, she has been in Colombia for approximately four months, speaks Spanish ‘speakably well‘- which has also become her preferred choice of language – and has been my friend and translator. True life saver!

Now, I’m retreating to my hostel (without Zakiya) after a fun-filled day with Leonardo as my chauffeur. Leonardo and I have established that he does not speak English. Imagine, less English than my Spanish. Nada. Zilch. I show him the address of my hostel on my mobile phone and he nods to indicate that he knows where I need to go. Great! Vamonos!

Still, this drive is in excess of an hour and I wish Leonardo and I could converse. I look out of the pickup and up to night sky. Now, I really want to tell him how magnificently the stars have decorated the sky. For a moment, I try to recall the Spanish word for ‘sky’. I know- from Spanish classes some nine years ago- or so I think!

“Leonardo, le ciel es muy lindo!”, I say aloud but Leonardo’s countenance tells me I’ve said anything but that. “No entiendo bien”, he responds. I lift my shoulders and embarrassingly smiles with him. E for effort, right? Later, I learn that I should have said, “El cielo es hermoso” by which time Leonardo & I have long parted ways.

This is where I acknowledge that this cannot work. I have plunged into the deep end and I must learn to swim. There will be no fear in ignorance only faith in effort. Estoy en Colombia y hablar español es necessito! I will be conjugating those verbs, rolling my tongue for those oral exercises and getting it wrong until I get it right.

Listen, whether you plunge, wander or you’re thrown into the deep end of the pool don’t think of drowning. Instead, focus all your energy on surviving, swimming or learning how to swim and let every part of your body dance with the waves. Be so focused on your greatest possibilities that that’s what you manifest and anything less has no place in your mind!

I am in the process of learning, being and becoming. In the meantime, I am Daniella-Enough! View all posts by Daniella Chase

A Whole Month In Colombia! It's Absolutely Been An Amazing Experience! @workawayinfo
Nothing has given me greater satisfaction than exploring, healing and nurturing myself. I wish you love, joy, love and wholeness, too.
Good For Trying New Foods But Too Much Chewing!
Attitude Of Gratitude, Always!
The Longest I've Been Away From Home! 😭😭 @workawayinfo
Guilty Pleasure 😋🍨 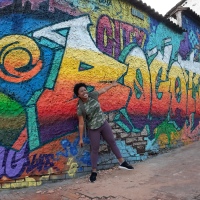